Book Showcase and Excerpt: THE TOWN DANCE by Nikki Skies 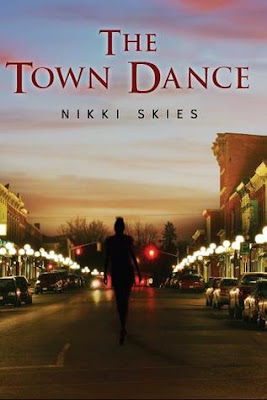 Lorna Simon has plans to diminish her resume of safe journalism and be known for reporting trendsetting stories. Certain she can persevere and protect her impressive family lineage, despite her carefree lifestyle as a social butterfly, this notion is put under fire after a night of partying thrusts Lorna into being a newsmaker instead of a news writer. Lorna alleges she has become the victim of a sexual assault crime committed against her by a woman, Trista, who is a promising event planner and an associate of Lorna's mother.

Paralyzed with the humiliation of having to publically defend her sexuality as a heterosexual, Lorna must decide to believe in her bouts of memory loss and forego the incident or rekindle her passion for journalism to protect her livelihood and uphold the integrity of her family.

Lorna had neatly placed the toilet seat cover and sat down just as someone else walked into the restroom. When the person walked past her stall she could identify through the cracks of the door that it was Trista. Trista stepped into the stall next to Lorna. Usually people look under the stalls as they walk past to check occupancy but not Trista. She seemed to be distracted.

The sensation to urinate left Lorna's body as she sat paralyzed on the toilet not wanting to breathe or move. She moved her legs in closer together so Trista could not look under the stall wall and notice her shoes. Lorna's thoughts were torn between the decision to run out of the restroom or wait until after Trista left.

Trista wasted no time relieving her bladder. She had been containing her composure and bodily functions for the majority of the day. She leaned her head against the stall wall and punched it with the sides of her fist. Trista let out a slow deep shriek of a cry, something else she had wanted to do all day.

Despite this restroom being across from the courtroom her proceedings were taking place, people opted to walk down the hall and use another restroom. For that reason, Trista used this one because it was quiet and she hallowed the same stall every day with morning prayers and affirmations. She had started morning affirmations at the request of members from one of her support groups.

Even though Trista had looked forward to telling her side of the story for months now, today was a rough day in court. Having been advised against giving interviews or talking to the media, Trista felt as if she had been victimized every day by local and national news. She had mixed support from the LGBT community and some members of her family back in Kentucky had even been harassed.

The defense team prepped Trista as much as possible but everyone knew with Lorna being the hometown princess, Trista's gratification would be short lived due to the cross-examination from the prosecution. And Uncle Adam came after her with a vicious resolve!

Trista needed to call someone because the blood in her left arm was beginning to burn. She needed to release it so it wouldn't hurt.

Trista let out another long, mellow-toned shriek and dialed a number on her cell phone.

"Hi, it's me… I feel like I can't breathe. I called my mom again this morning and she hasn't called me back yet. What if she never calls me?”

Trista began to bang her fists on the walls again.

Balls of perspiration beaded Lorna's face as her heartbeat pounded in her throat. She wasn't sure how much time had lapsed but she knew if she didn't come out soon, Uncle Adam would call her cell phone to look for her.

"Today was hard. It was so hard, so hard…my arms feel heavy. My left arm looks swollen…"

Even though the phone was not on the speaker function, Lorna could hear the person on the other end yell.

"No, seriously it does! And it burns, it hurts so bad!"

Lorna learned about Trista being a "cutter" when Uncle Adam shared the police report with the court. Until all this happened, Lorna thought she was a good judge of character. But in hindsight of becoming friends with someone who intentionally hurt themselves and her father advising her of the potential dangers one night stands can bear after this part of her social life was embarrassingly shared in the courtroom, Lorna knew she needed to re-evaluate some aspects of her lifestyle.  Lorna decided that during Trista's next cry outburst, she would make a quiet yet swift run for the restroom door.

"I spoke up for myself and then, he humiliated me… I wouldn't wish this on anyone," Trista banged her head against the wall and then pounded her fist again.

Lorna quickly stood and pulled her skirt up. As she cautiously slide the lock, the automatic flusher activated on the toilet.

Trista stopped her pounding and crying.

Lorna rushed out of the stall and to the door of the restroom. When she heard the automatic flusher go off from Trista's stall she turned around.

Trista opened her stall door and locked eyes with Lorna. One of Trista's shirt sleeves was rolled up and showed fresh cut lines on her forearm.

Trista still had her cell phone to her ear. Her mascara was smeared around her eyes and her chest and neck were drenched in sweat. Lorna reached to push the door open but it didn't budge.

The person on the other end of the phone could be heard yelling.

The restroom temperature felt like it had risen at least 20 degrees. Lorna could feel anxiety forming knots in her chest and her throat began to close up. She closed her eyes to stop the room from spinning but even with her eyes closed, she saw Trista's face.

"She won't even look at me she's such a coward," Trista continued.

Lorna opened her eyes to see Trista walk towards her. Lorna pushed at the door again but to no avail, it would not open!

Nikki Skies is an accomplished poet, author, and playwright living in Atlanta, GA.  Skies is the author of the short story book, Mississippi Window Cracks and the published collection of poetry and  prose, Pocket Honey, Wind & Hips. A firm believer in the power of education, Skies studied for her BA and MFA in Theatre and Screenplay Writing and uses her art as a teaching tool to encourage an interest in literacy. The Town Dance is the dramatic debut novel from Skies.

Connect with the author: 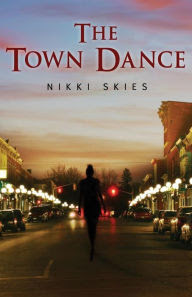